I recently had the opportunity to take a SAR – that is, a Sexual Attitude Reassessment. It’s generally a 10-12 hour-long workshop wherein an instructor guides the class through a series of sexual images and topics. The point is to prepare sexuality professionals (sex educators, counselors, and therapists) for all the varied sexual practices we’ll encounter out in the wild.

Somewhat surprisingly, I haven’t seen a ton of blog posts about people’s SAR experiences out there. I don’t recall signing a disclosure agreement, so unless other folks did, I’m not sure what’s causing this lack. (I should note that in my SAR, we established a set of boundaries and safe space practices early in the workshop, such that anything I disclose here is either based on my personal response, or generalized to such an extent that it’s basically anonymized)

I think for a lot of us going in, there was an aura of illicit thrill surrounding the SAR. I suspected that, as one blogger put it, I’d be subjected to “more than my share of freakshow sex films” during the workshop.

I don’t have a problem with viewing sexually explicit materials. I’m very comfortable talking about sex. I tend to be pretty aware of my own triggers. So this SAR would be a totally chill experience, right? (Yes, I’m actually going to relay highlights from my SAR experience in memes. So there.)

The icebreaker was a tad awkward, yes, but that was the point. Many of us (sex educators, therapists, etc.) are used to asking others about their sexual habits, but how does it feel when those questions are directed at us? We need to know how we react in these situations so we can better serve our folks.

One of the major themes of the SAR was language. How do we use language? When do we utilize scientific, medical language (penis; vagina) as opposed to slang or vernacular language (dick; gash)? As a folklorist, I was like “I’ve got this!” because in my discipline we already study informal and local manifestations of language and culture, and how they express and reflect a group’s values. There’s a tension, of course, between meeting people where they’re at, and being an educator wanting to teach nuance. Most sex educators rail about how people use “vagina” to mean “every part of the female genital structure” when it’s really just the canal, from the opening at the inner labia up through the cervix. The external bits (clit, outer and inner labia, all that good stuff) are collectively known as the vulva. But what do you do if it’s really important to a student/client/whomever to claim and use the word “cunt”? It may be important for us to de-stigmatize language around sexuality as part of our educational endeavors, but then it’s also on us to set the tone and be respectful.

After a lot of these language-y exercises came the part we’d all heard about: watching sexually explicit materials. That wrapped up the first day of the SAR, and after getting some sleep, I returned for day 2.

Then, more discussion. Someone finally brought up the very obvious point: what happens if you get aroused in one of these situations? When it is ok to feel arousal if you’re a sexuality professional? 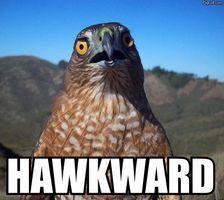 …except we deal in the awkward, so we’ve gotta make our peace with it. Besides, I’ve always thought that awkwardness is in the eye of the beholder.

There were actually a few intriguing takes on how to deal with arousal in professional contexts. Many people espoused the “acknowledge it, then move on” approach, since repressing a feeling doesn’t actually help anything. One person said that they’re grateful to feel arousal, because it means that all their parts are working, and that they haven’t become jaded or numb in the course of being a sexuality professional. I thought that was pretty neat.

There was a unit on sexuality and culture, which I would’ve done differently given that my academic background is in folklore and culture… but ah well. Different disciplines deal with culture in their own ways, mine’s not necessarily more valid than anyone else’s, blah blah blah. (I know, that one’s kinda mean… but it’s really more aimed at a panel I saw at the AASECT conference that happened right after the SAR that was simply horrific and deserving of its own blog post)

To frame that in a more positive light, I learned that I’m likely to get annoyed if you don’t differentiate between rituals and rites of passage properly, but I also know when to keep my mouth shut. One cool thing that did come out of the cultural unit was an exercise where we mapped out our own cultural identities (what we’d call “folk groups” in folklore studies), and then discussed positive and negative attributes/stereotypes surrounding them. It was actually quite powerful to hear people claiming identities that are often looked down upon and stating what they are and are not. As an example, in the exercise where we were supposed to say “I am X [identity] but I am not Y [stereotypical association]” people were saying things like “I am over 50, but I’m not old and boring” and “I’m Christian, but I’m not narrow-minded.”

So that was neat, and was meant to (I think) give us a bit more empathy for where our students/clients/etc. are coming from as they juggle their multiple overlapping identities and trying to grapple with something complex like sexuality. Because we’d established such a safe, non-judgmental environment in the workshop, people disclosed a fair bit about themselves, me included, and that was an interesting experience. I feel no regret for disclosing more than I normally would in a professional context, and I think that was in part due to how awesome my SAR-mates were (some of us went out for a meal later and joked that we’d formed a secret cabal and were now forever linked). In other words, we have an obligation to normalize healthy expressions of sexuality, even if they’re not what we’re into personally. How’s that for a mindfuck? And how do you even distinguish between healthy and unhealthy expressions of sexuality, when so much of the medical discourse is pathologizing, and we’re enculturated to have strong disgust responses to anything non-normative to begin with? I think the SAR is supposed to be a first step in helping us address this sort of dilemma.

And… yeah, the materials were pretty dude-centric. I didn’t take it as something to get offended about, but rather yet another calculated decision to get us to evaluate our own stances about sexuality. If there’d been absolutely no depictions of women, I’d probably have been a bit riled up, but this wasn’t intended to be a prescriptive “Here’s How Sexuality Should Be” workshop. It was a provocative offering, meant to get us reflecting on our own positionality. You can do that with a variety of materials, and this is just the selection of the sexuality spectrum that we got stuck with. (That being said, I was feeling pretty done with male genitals by the end of the workshop, and I like them enough to have married a dude.) While discussing online sexuality – and the varied forms its takes, from dating and hookup websites to bastions of subculture – we dipped briefly into BDSM. I wish we’d had more time to talk about it, since it’s one of the topics I research. But it was intriguing to note that some people had simply never been exposed to it before (which totally had me in educator mode, contributing tons to the conversation in an effort to honestly depict this phenomenon that I’ve read ethnographies on and hung out with practitioners of, and am hoping to do fieldwork of my own on someday).

In my experience, we did discuss a number of social justice issues in the SAR, both because of how they were embedded in the teaching materials, and because we participants brought these topics to the forefront frequently. Not everyone in a SAR has had that experience, though, as Claire Litton laments in her blog posts about her experiences (hers is the most thorough blog post series chronicling a SAR experience that I’ve found). Bianca Laureano also condemns the lack of social justice elements in the SAR she experienced. The one I went through wasn’t perfect in that regard, but we did address a number of social justice issues (such as if sexual pleasure is a universal human right, how do differently-abled people access it?). However, the event’s price tag was prohibitively high and thus would’ve limited many people’s access to the experience, contributing to a somewhat elite group being in attendance.

I didn’t find much material in the SAR to be very triggering, unlike another blogger, whose SAR had a unit on pedophilia. Our material was pretty mild in comparison, or maybe I’ve become somewhat desensitized to sexual materials through working with sexuality for so long (I’m only a few years into the formal side of my sex education career, but I’ve been researching and writing about sex foreeeever, it seems).

Overall? I’m glad I did the SAR, though there was less shock value than I’d anticipated. I learned a lot about processing complex emotions related to sexuality, how to navigate professional and personal boundaries, and various teaching exercises for getting people to consider their own relationships to gender, sex, and sexuality.

I came away feeling validated in my choice to pursue further professional opportunities in the sexuality world, because damn, I have a handle on this stuff. I’m still accruing factual knowledge, but overall I’m great at talking about sexuality in various modes, relating to others where they’re at, and exploring my own biases and identities. This is what I’m going to do with the rest of my life, which I find tremendously exciting! 3 thoughts on “My SAR Experience (Told In Memes)”